Back to Tour Artists
Jump to Spotlight

My primary creative focus has been weaving baskets made of various natural fibers. As a cultural anthropologist and craftswoman, I am drawn to traditional crafts because of my fascination with the way these forms of artistic expression keep cultural values alive. Baskets were probably some of the first carrying vessels and containers used by peoples all over the world.

First Nations tribes have made baskets for thousands of years in North America. The indigenous peoples of the Northwest are renowned for their large carrying baskets and cedar bark hats, as well as baskets for ceremonial use. Common materials are bear grass, cedar bark and root, spruce root, cattail, horsetail root, Oregon grape root, and various grasses and reeds.

Pine Needle Baskets:
I first learned how to make pine needle, sweet grass and raffia baskets from a Cherokee Metis while was living in Northern California. At the time I gathered the pine needles from the Mount Shasta area. Now I order my pine needles and sweet grass from a Southern basket supplier. Using the traditional coil method, my pine needle baskets are often trimmed with ceramic or glass beads, sweet grass, pinecones, or walnut slices. I use a waxed linen thread rather than raffia because I can make a stronger basket (beeswaxed thread had been used by early Irish, Scottish and other American colonists).

Traditional Baskets:
When the Irish, Britons and Scots Irish migrated to the New World in colonial times, they brought their craftwork with them. Like so many ancient peoples, the colonists from Great Britain and Ireland made baskets for a multitude of uses: potato baskets, fish creels, harvest baskets, bee-skeps, berry baskets, etc. They wove with straw, rushes, willow branches, blackberry bramble, wild clematis vine, and nettle.

Weaving baskets allows me to creatively connect with my ancestral heritage and keep the sense of cultural tradition alive while exploring creative innovations. My traditional style baskets are made of hand dyed rattan reed, often with wood or metal and wood handles; the rustic baskets may consist of willow, reed, gathered perennials, weeds, branches or driftwood collected from the ocean and lake shores.

Sample art below. Contact the artist for pricing, details, and availability. 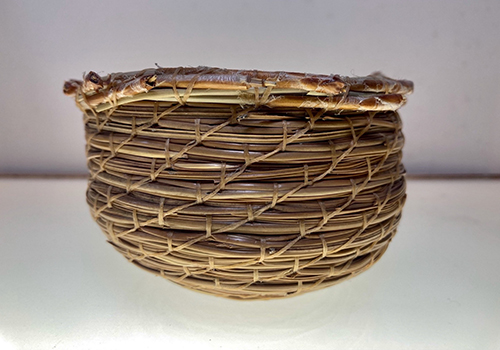 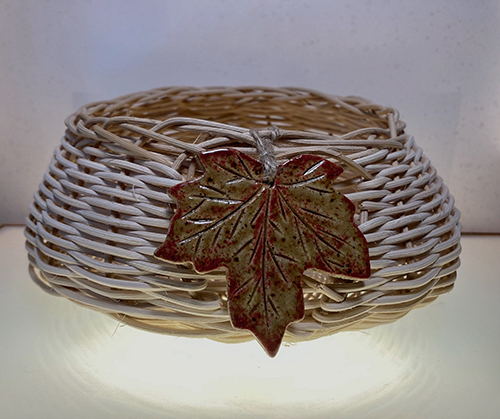